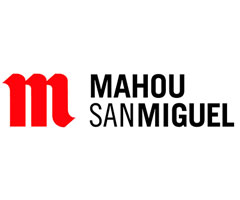 A 100% Spanish-owned family company, the sector leader in the country with a production share of 34%. It has eight brewery centres, seven in Spain and one in India, four water springs with packaging plants, and a professional team of more than 3,200.

The firm's history dates back more than 125 years, beginning with the birth of Mahou in 1890. Ever since then the company has continued to grow. In the year 2000, Mahou acquired San Miguel. In 2004 it added the Reina brand from the Canary Islands to its portfolio, followed in 2007 by Cervezas Alhambra. It furthermore diversified its business by purchasing Solán de Cabras in 2011.

It has an extensive portfolio of Spanish beers, including Mahou Cinco Estrellas, San Miguel Especial and Alhambra Reserva 1925; pioneering products in their category, such as San Miguel 0,0, Mahou Barrica and San Miguel ECO, and brands suitable for coeliac sufferers such as San Miguel Gluten Free and Mahou Cinco Estrellas Sin Gluten. It also has an extensive range of international beers courtesy of agreements with partners including Carlsberg and Warsteiner, and mineral water brands such as Solán de Cabras.

Internationalisation is one of its strategic cornerstones for the development of its business. It produces more than 70% of Spanish beer consumed worldwide, and has a presence in over 70 countries.