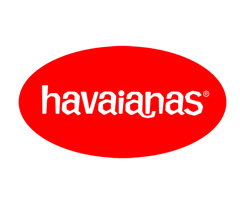 Havaiana is a footwear brand that was born in 1962, in Brazil, by the company São Paulo Alpargatas, inspired by the traditional Japanese sandals "Zori" made of rice straw.

Destined mainly to the disadvantaged classes, they were known as "poor sandals". In 1994, the company gave a total turn to product focus through strong brand repositioning.

Thereby, after having had a single line for 32 years, between 1997 and 2004 new models and colors were launched, reaching 300 different ones and more than 25 Havaianas models, destined to different segments of the higher income market. In 2008, in response to the great commercial success of its products, Alpargatas S.A. it was implanted in Europe.

Two years later, in order to overcome the seasonal nature of the sandals, Havaianas launched new categories of products for the European market: sports shoes, espadrilles, ballerinas and even water shoes.